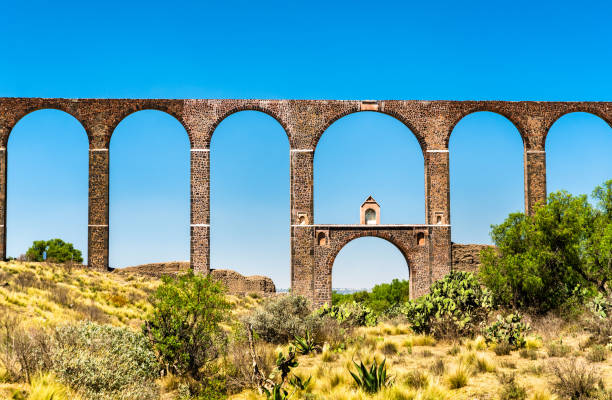 It is well worth taking this walk to one of the Mexican territory’s most outstanding colonial architectural attractions.

Crossing a ravine on the shore of the State of Mexico is the Aqueduct of Padre Tembleque. A great aqueduct that boasts its formidable construction and gives us a great example of the combination of natural landscape and architecture.

A huge construction that rises to more than 35 meters was built with the solid stone of the region and the labor of local indigenous people.

It is a true tourist treasure and one of the most ambitious hydraulic constructions in the world.

How to get there?

To see the Aqueduct of Padre Tembleque, you must use the Mexico-Tulancingo highway. Then take a detour to the town of  Nopaltepec that  route that leads to Los Arcos.

40 minutes from Pachuca and Teotihuacan from Mexico City, it takes about  20 minutes to get there. It is located between the towns of Zempoala, Hidalgo, and Otumba in the State of Mexico

Visiting the Padre Tembleque Aqueduct can be complemented with a tour of the nearby towns such as San Felipe Teotitlan, Axapusco and Otumba.

“One of these bridges has the largest single-level arch ever built for a project of this kind.” highlighted the UNESCO World Heritage Committee, whose world headquarters are in Paris, France.

It was built to bring water to the residents of Otumba, Zacuala, and Zempoala. It was the essential hydraulic work in the Colony. At 44 kilometers in length, its highest conservation is due to burnishing, which consists of lime, water, honey, and nopal slime—making it a brilliant piece of engineering.

This hydraulic system was built more than 400 years ago in the central Mexican plateau, passing through the Mexican municipalities of Nopaltepec. Acapulco and Otumba. And the town of Tepeyahualco in Hidalgo.

The Padre Tembleque aqueduct is a must for anyone interested in Mexico’s colonial past. Architecture, Engineering, Landscapes, and in general things peculiar to Mexico.

The place, in general, has magic and offers spectacular landscapes for good photos. So get ready for to show it to your followers  The site has great potential to become a large state park of high beauty.

It is best to go  on weekends, there are many people and traveling businesses. So one can feel more secure.

Why should you visit it?

Three  years ago, UNESCO inscribed it on the list of the World Heritage.

It is the only one of its kind. One of its bridges has the largest arch that has been seen in an aqueduct (39 meters high). The architecture is special because it was inspired by European hydraulic systems, although it was made with indigenous construction techniques.

Although the best known section of the aqueduct is its monumental arches, the system is much more complex. Its six arches with 138 arches in total do not make up even five percent of the original structure. To appreciate the work, the most advisable thing is to hire a guided excursion.