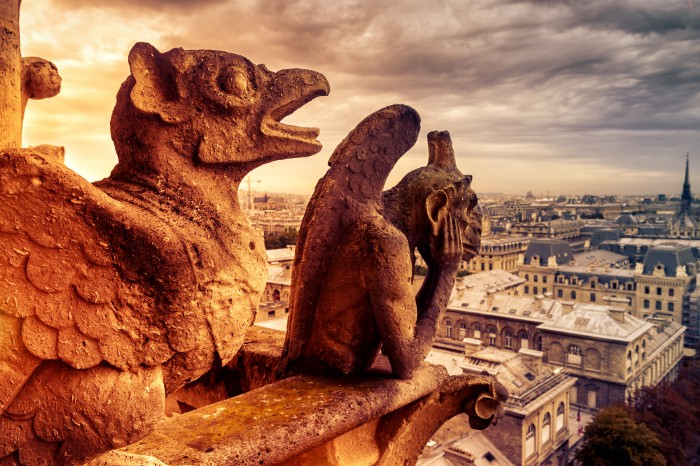 When most people think of gargoyles, they think of the sculptures that hang on the exterior of Notre Dame Cathedral. The gargoyles on Notre Dame Cathedral in Paris are among the best and most famous around the globe. These horrific monsters, officially called as grotesques (real gargoyles have waterspouts for mouths), stare grimly out on the City of Lights. Gargoyles were also a regular sight on the rooftops of cathedrals and schools prior to the 1800s. Humans in many societies claim that these sculptures guard them and keep negative energy at bay. Oddly enough, some individuals believe these are wicked beings looking for the right opportunity to strike. Here’s what you need to know about these gargoyles and where to spot the best of them in Paris. 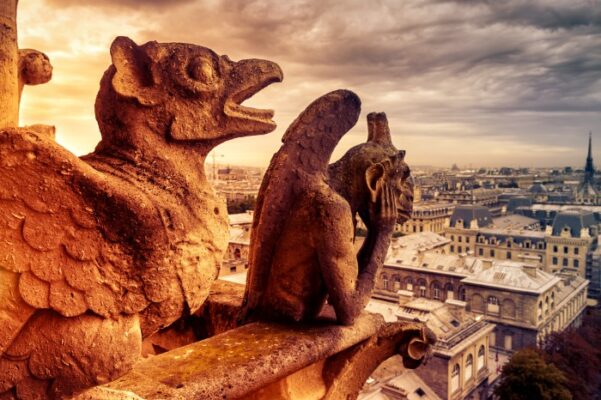 What are gargoyles and what’s their purpose?

Notre-Dame is guarded by gargoyles and chimaeras. If you’ve ever gone up to Notre-Dame de Paris church, you’ve undoubtedly observed strange-looking, fanciful statues nestled between soaring buttress and pinnacles among the cathedral’s rich ornamentation. The ghouls and other chimaeras are an important element of the cathedral’s heritage and a prominent feature of the building.

The main aim of the gargoyles is quite pragmatic. Rainwater running down the rooftops of these old mediaeval buildings must drain away without trickling along the walls, which might cause damage. The gargoyles safeguard the cathedrals as well as the stonework from harm produced by heavy runoff by expelling rain water. That is the primary distinction between gargoyles and chimaeras.

The symbolic role of the gargoyles of Notre-Dame de Paris.

The gargoyles defend the structure not just from inclement weather, but also from water trickling too near to the walls. They also serve as a sign of protection for the place. They feature creatures motivated by fantasy bestiaries, wild or tamed animals, and even people, and are often terrifying in various ways. By frightening devils and bad entities away from the holy walls that surround the congregation of churchgoers, these creatures keep them at bay. They also serve as a purifier by digesting polluted rainwater and wastewater and keeping it distant from the sidewalls.

Artists have been inspired by their unusual and mythological looks, seeing fantastic creatures inside them and incorporating them into creative artwork. Gargoyles, for example, play an important role in Victor Hugo’s work. Their outward deformity, along with their position as saviours, resembles Quasimodo’s hunchback.

So, whether you tour the île de la Cité or wait in the courtyard of Notre Dame, glance upwards at the building and enjoy the gargoyles, the structure’s lonely and silent protectors who have endured ages of human perversity, battles, and poor weather.

This church has several beautiful gargoyles including flying buttresses on the outside. The Church of Saint-Séverin is a Roman Catholic cathedral in Paris’s Latin Quarter, on the bustling visitor route Rue Saint-Séverin. It is among the earliest churches on the Left Bank, and it is still in service as a house of prayer today.

The Tour Saint-Jacques is a landmark in Paris, France, situated near the junction of Rue de Rivoli and Rue Nicolas Flamel inside the 4th district. The ancient Church of Saint James of the Butchers, was made in the 1500s but most of it was razed to the ground in 1797 in the French Revolution. Saving just the tower, the remaining structure is now home to this iconic 171-foot Flamboyant Gothic building. It has several gargoyles on top, which you can see using binoculars or a telescopic lens.