It is the largest mud city in the world, also known as the bride of the desert or city of the wind towers. In terms of population, it is the fifteenth city in Iran and the eighth in size. This beautiful city preserves impressive architecture, which combats the high temperatures in the area. It is also the place where the small Zoroastrian community that remains in Iran is concentrated. Despite some finds dating from the 7th and 8th centuries, this city’s history dates back to much earlier, that is, the year 3000 BC.

In the era of the Sassanids, Yazgerd built the city and gave it to his daughter. For many centuries Yazd was the last stop for the caravans, at the same time that it was the first safe oasis at the western end of the desert upon their return from China and India, through the Silk Road. Most of its development took place during the Kakoui dynasty, which led to the construction of numerous mosques, schools, and qanats (underground canals).On the other hand, the Safavids promoted the trade through fabrics made of silk and gold. Yazd is considered the first adobe city and the second most historic after Venice in the world. The name Yazd means praise and worship of the Lord, as well as the city of God. In this city, wind towers stand out on top of the roofs, towers with an ingenious structure that collects air and refreshes the interiors of houses and water tanks. Some of the important monuments of the city are linked to the cult of Zarathustra. The recommended places to visit in the area are: Aljama Mosque, Narin Qal’eh, Dolat Abad Garden, Amir Chakhmaq complex, Towers of Silence, and Zoroaster Fire Temple.

Among the souvenirs and crafts from Yazd, we can name a variety of sweets such as qottab and baklava, handmade rugs, cashmere, and ceramic tiles. Due to its spectacular architecture, historical structure and beauty, Yazd was added to the UNESCO World Heritage list. 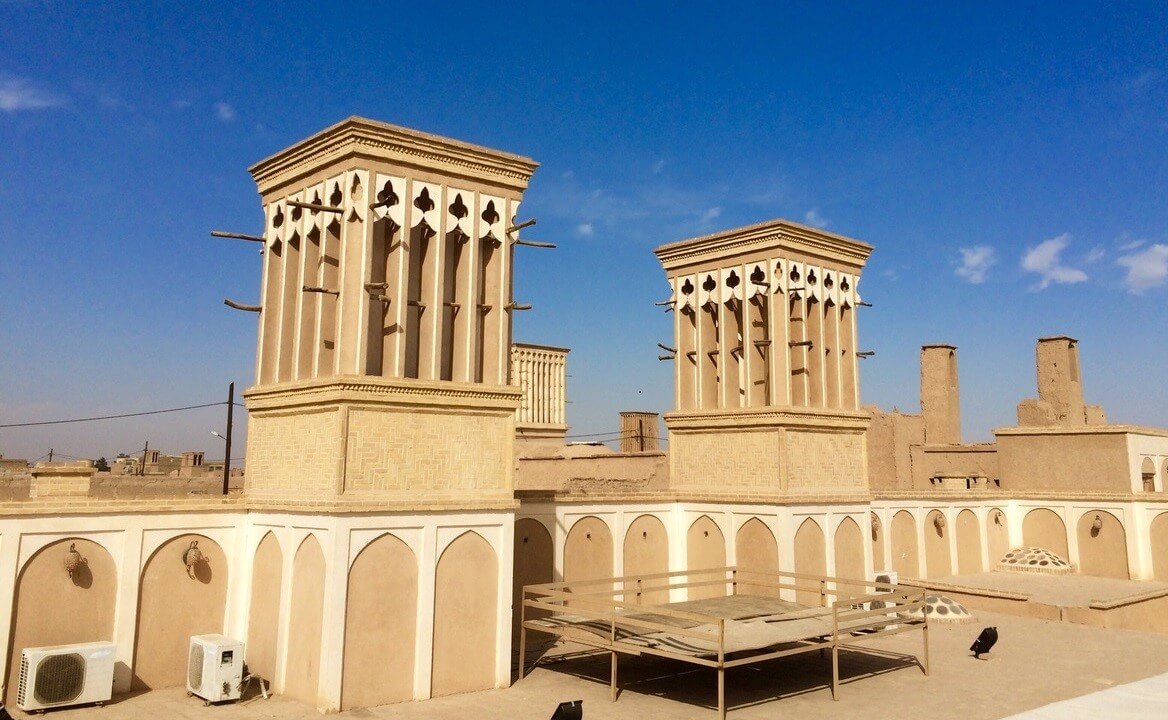 Yazd’s fame is indebted to the architecture of the old town, built entirely of adobe. However, the historic center’s most important monuments are the “wind catchers” (Badgir), perceptible from afar. For this reason, Yazd is also known under the name of the “city of the wind towers.” As there are not many windows to the outside in Yazd’s houses, these towers serve to provide the necessary ventilation through cooling inside the buildings. This system takes advantage of two environmental conditions in the region: air pressure and temperature variation. 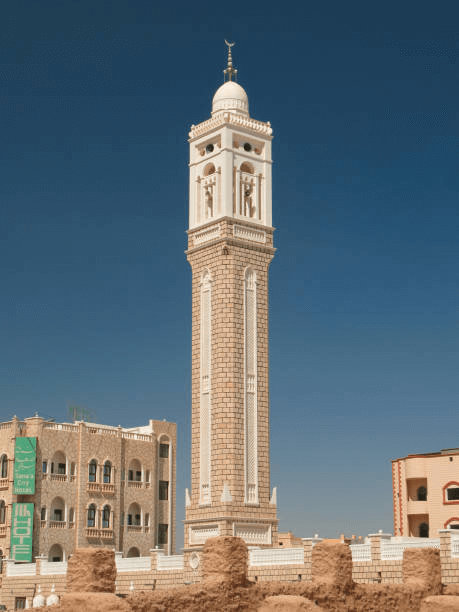 A masterpiece of Iranian Islamic architecture with towering minarets and magnificent mosaics that took a century to build in the heart of the city during 3 dynasties: the Ilkhanates, the Timuris, and the Seljuks. The majestic entrance portico is the highest and most beautiful in Iran, covered in colorful tiles with all geometric shapes and calligraphic inscriptions hanging from the vaulted ceiling. The two 48-meter-high minarets, being the tallest in Iran, were built during the Safavid era. Inside, you can see inscriptions with Kufic writing. Having a square shape, the mosque is said to be inspired by the Kaaba. 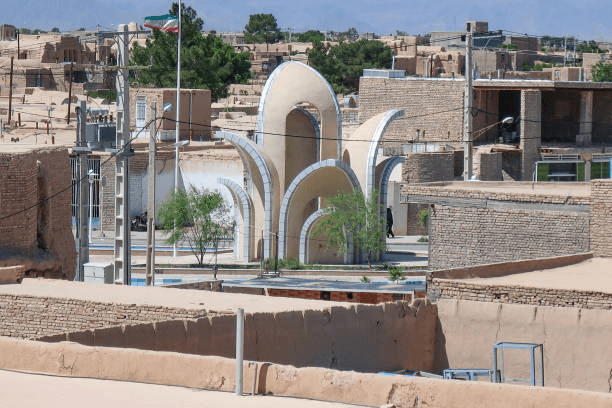 Transformed into a restaurant-theater where people smoke hookah sitting on the cushions. Its large rooms with vaulted ceilings, semi-covered walls with turquoise terracotta tiles, and recessed with pointed arches have created a fascinating atmosphere. 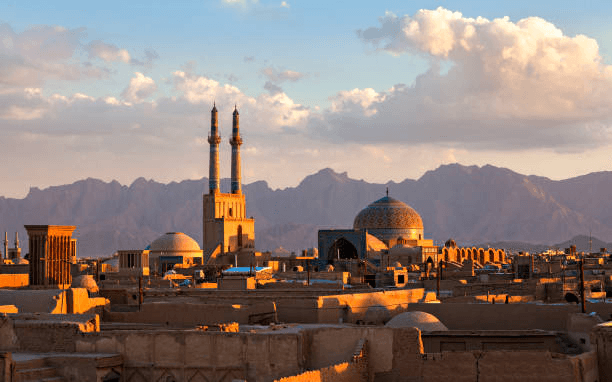 Traditional gymnasiums dedicated to the exercises of Varzesh-e Bastaní. Its origin comes from a method of training soldiers during ancient Persia. 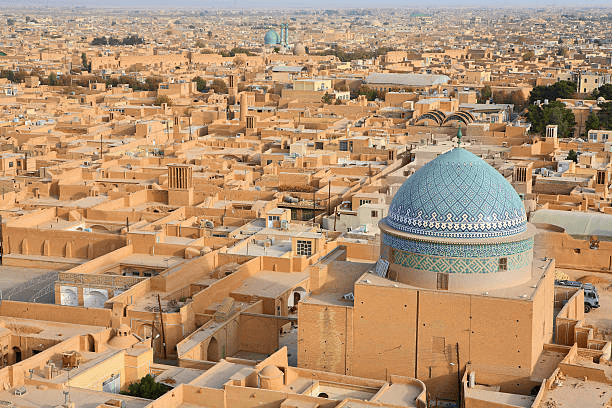 Next to the Amir Chakhmaq complex where it offers sweets both to take away and to eat. Do not forget to visit the shop, even if you do not intend to buy cakes and sweets as you can try all the Yazd specialties: baklava, qottab and loze nargil (made with almond, rice, or chickpea flour, along with pistachio, coconut, and rose water). 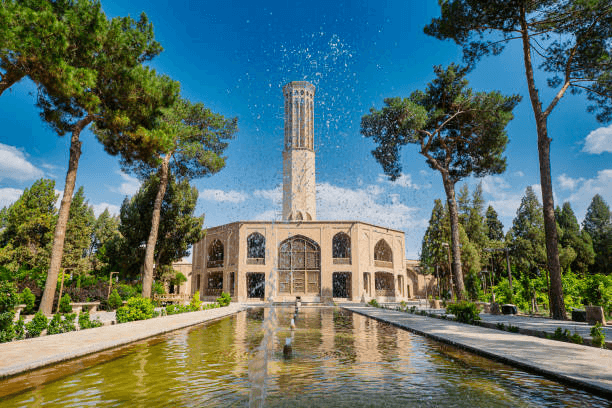 Built under Mohammad Taqi Khan during the reign of Afshar, similar to other gardens in Iran, it features a specific mansion, a large pond in the middle of the courtyard, and fruit trees. In addition, the tallest and most peculiar wind towers, considering their structure, are placed in this garden with more than 180 years built in the Zand era. There are six octagonal shaped wind towers, 3 of which are recently built about 34 meters high. The garden has three mansions and a hall of mirrors, where Karim Khan’s residence in Yazd used to be. This garden is one of the nine gardens listed by the 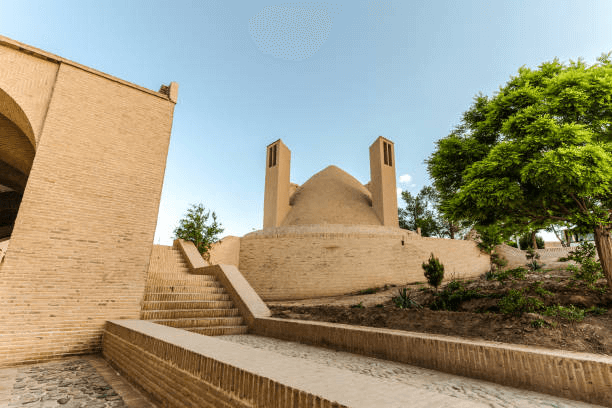 One of the oldest constructions in Iran found in Meybod. According to archeologists, this castle dates back to 3000 BC. C and is considered the second largest brick building after the Citadel of Bam in the world. This castle on top of a hill, offers us incredible views of Meybod from its terrace, and from the outside, its brick walls and a restored tower stand out. It has several floors that stairs can reach, and its underground part has a labyrinthine shape of interconnected channels. In addition, it had defense towers, which have been destroyed over time. The bricks used in the castle in different sizes attest to the long-term construction of the castle.