Where was La la land filmed?

La La Land was filmed entirely in Los Angeles and its surroundings. The movie is a wonderful homage to the entertainment capital of the world and is full of references to the classic movies that made it great.

Director Damien Chazelle spent nearly a year editing a movie that has many scenes filmed in one take.

Chazelle had the idea of filming in locations with a retro feel. In addition, this awarded romantic musical was shot using the old school wide-screen style, the CinemaScope.

The actors, our favorite driver Ryan Gosling and Emma Stone (Birdman, Maniac), are no Broadway performers. They had to do their best to reduce errors when dancing long uninterrupted takes.

Some of the sequences had to be filmed during a specific time in the day, to catch the beautiful light of the sunset or the blue hour.

We have reunited here more than 17 filming locations, but bear in mind that La La Land was filmed in more than 60 places in L.A. Also, we tried to keep spoilers to a minimum.

The most memorable scene of the movie, pictured in the first image of this report, is when the couple dances to the rhythm of the theme A Lovely Night, filmed on a road overlooking the city at Griffith Park.

The place is called Cathy’s Corner in Mt. Hollywood Drive (situated not far from the legendary Mulholland Dr). Don’t expect to find the bench and the streetlamp there, these were movie props added to the scene by the production team.

This spot is located near the iconic Griffith Observatory planetarium, a magical setting atop the mountain also featured in another scene.

The traffic jam opening sequence of the movie was filmed at the massive interchange connecting the Century Freeway 105 to the 110.

Also known as the one ten, this imposing structure is located near the Athens and Watts neighborhoods.

However, the exterior with the You Are the Star mural, depicting Hollywood stars watching a movie in the cinema, is located at 1648 Wilcox Avenue.
Image by Summit Entertainment

There is a scene where Mia and her boyfriend enjoy an evening at the stylish Jar Restaurant at 8225 Beverly Boulevard.

Mia works in a fictional coffee shop located at the Warner Bros Studio backlot, where several sequences were filmed. 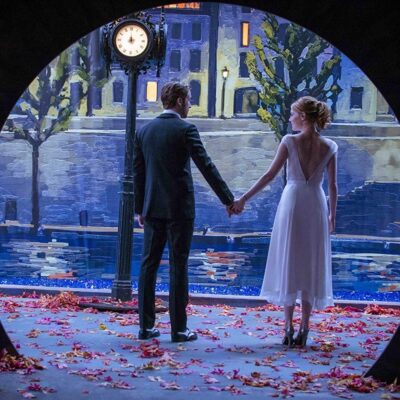 Mia and Sebastian have a date under the neon lights of a bar in the Grand Central Market in LA’s Downtown.
Image by Summit Entertainment

The couple takes a walk on the majestic Colorado Street Bridge in Pasadena, built in 1912.

Sebastian ends up dancing on Hermosa’s Beach Pier. This spot was also featured as a filming location of Westworld.

The lovers visit the park where the Watts Towers are standing, a series of sculptures made of scrap metal.
Image by J Jakobson

The Angels Flight is a funicular railway in Bunker Hill, closed since 2013 due to a derailment.

The movie crew fixed the machinery to make it work again for the shoot.

This same location was used to film a scene in the city where the HBO’s Perry Mason series was filmed.

The exterior of the cinema where Mia and Sebastian watch Rebel Without A Cause is the Rialto Theatre at 1019-1023 Fair Oaks Avenue in South Pasadena.

According to Seeing Stars, the pool party house scene was filmed in a modern mansion located at 4533 Estrondo Drive in Encino, in the San Fernando Valley.

This is a private residence – if you are visiting, please be considerate to the owners of the property.
Image by Summit Entertainment – Map

The Lighthouse Café is a mythical bar and nightclub, very active as a jazz showcase since 1949, located in Hermosa Beach.

Both the interior and exterior were used for the film.

Mia walks down Vine Street after losing her car.

The performance with the jazz band The Messengers (and John Legend) was recorded at the historical art deco venue El Rey Theatre (5515 Wilshire Boulevard, Miracle Mile).
Image by Summit Entertainment